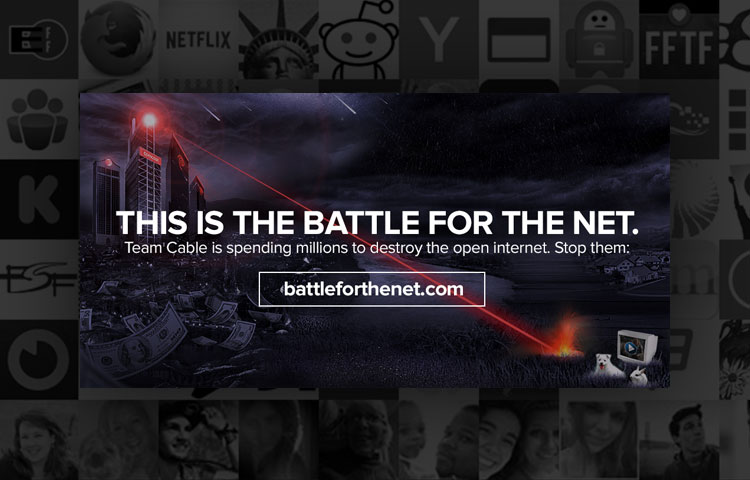 On Feb 26 the FCC will vote to save net neutrality or let Comcast and other ISPs create Internet slow lanes. Some members of Congress, on behalf of their Cable donors, are trying to stop the FCC from protecting the Internet we love.

At MediaFire, we are committed to keeping the web open and accessible, which is why we are excited to be part of “Battle for the Net”, an online campaign created by Demand Progress, Free Press Action Fund, and Fight For the Future. For the next few weeks, MediaFire will be joining forces with some of the worlds most popular technology companies to help educate and empower users like you to help us protect the future of the internet in the US and around the world.

We strongly urge you to visit www.battleforthenet.com today to let your congressional representative know where you stand on keeping the internet open.

Help us flood Washington, DC with calls and emails to show lawmakers that the whole Internet is watching, and we’re literally counting down the seconds until we get real net neutrality.

WHAT IS NET NEUTRALITY?

Net neutrality is the principle that all traffic on the Internet should be treated equally. Whether you’re upvoting a cat photo on Reddit, or chatting with friends on Facebook, all the information traveling across the Internet to you and from you should be treated the same. Net Neutrality insures that your Internet service provider — whether that’s a broadband company like Comcast or a wireless carrier like AT&T or Verizon — can’t block or slow down your access to that content.

Why is that important? If you’re a consumer, there’s nothing in the way of you accessing your favorite sites and getting your favorite content. Net Neutrality insures that all content is treated equally on the web.

WHAT ARE THE FCC’S CURRENT RECOMMENDATIONS?

In a guest editorial in Wired Magazine on February 4th, FCC Chairman Tom Wheeler outlined several of the FCC’s current proposals for ensuring Net Neutrality. His additional recommendations include:

No blocking: This means that broadband service providers — the wireless, cable and satellite companies that offer Internet service to consumers today — “may not block access to legal content, applications, services, or non-harmful devices.”

No throttling: Broadband providers may not slow down the delivery of lawful Internet traffic, based on the content, applications or services that are delivered.

No paid prioritization: Broadband providers can’t favor some traffic on their network over other traffic. This rule means no “fast lanes” on the Internet.

The rules that apply to wired data delivery should apply to mobile too. No blocking or prioritizing data delivery there either. This would cover the “data throttling” debate.

The FCC will define the Internet as a utility and, as Wheeler writes, “use its Title II authority to implement and enforce open internet protections.” With this new classification, the FCC would get to regulate broadband under the rules used for the old telephone network. This legal definition establishes broadband as a “common carrier,” a centuries-old concept that means their network must be open to everyone.

Open Internet conduct standard: The FCC knows that new threats to the open Internet may come up in the future, so it included a general catchall rule that establishes a standard for future conduct. This rule prohibits ISPs from adopting practices that would “harm consumers or edge providers.”

Transparency: ISPs will need to offer specifics about how they manage and run their networks. This rule was actually the one piece of the 2010 rules that wasn’t struck down by the federal court. The FCC said it is keeping this rule in its new version — and even making it stronger.

The Challenge: Stopping Congress From Getting in the Way

Since the announcement of the FCC’s proposed rule change, the head of the House Committee on Oversight and Reform has announced that they plan to launch an investigation into the agency, pointing to a White House effort to influence the FCC to craft rules that “favor a coalition of pro-net neutrality startups”.  The committee’s telecom- funded chairman, Jason Chaffetz, R-Utah is leading the investigation effort.

The FCC’s current recommendations represent our best chance of preserving the internet for future generations. We urge you to join us in our efforts to protect the web by visiting www.battleforthenet.com today.