We are pleased to announce the release of MediaFire Express 0.13!  This new release includes a vastly improved screen-capture tool which makes sharing and annotating screenshots a breeze.

Let’s say you’re trying to explain a problem with your application to tech support and they aren’t getting what you’re trying to tell them? Take a screenshot of the problem, highlight the area where the problem appears, add text pithily explaining what it all means and draw an arrow from the text to the highlighted area.

On a more mischievous note: screenshot a funny picture, add your friends name to it and email it to your group. Or use the highlight tool to draw a mustache and Captain Morgan hat on a celebrity.   Take a screenshot of a group picture from your company’s website and add the caption “Where’s Waldo?’     (Tip: Google “Funny screenshots” for more ideas for ways you can amuse your friends and annoy your enemies with MediaFire Express’ screenshot annotations.)

Here’s a quick demo of how it looks: 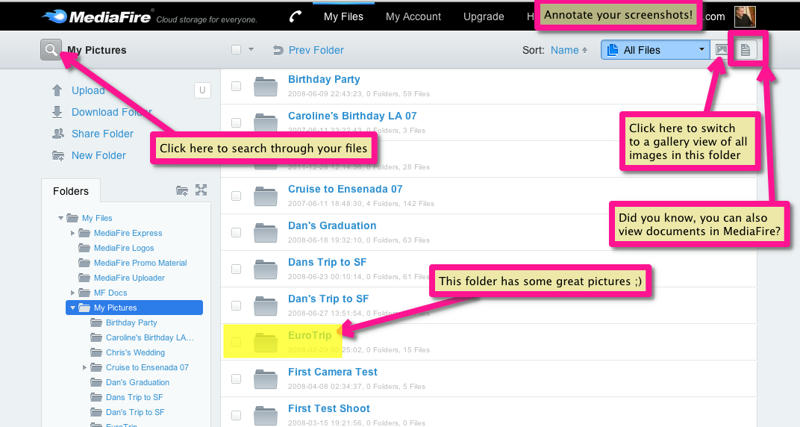 In addition to the annotations, we fixed a few bugs and added a couple more features so make sure you update your MediaFire Express to take advantage of all the new goodness.

Here’s a list of everything that’s new in this version:

Make sure to download the latest version (0.13) here: http://www.mediafire.com/software/express/tour.php